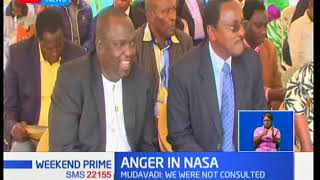 Here are some key facts about NASA (National Aeronautics and Space Administration):

1. NASA was established on July 29, 1958 by the National Aeronautics and Space Act.

3. With it’s motto as “For the Benefit of All”, NASA was influenced by the space race, with the launch of the Soviet space program’s first human-made satellite, Sputnik 1, on October 4, 1957.

4. The Apollo program, which was a spaceflight program from 1961-1975, was designed to land humans on the Moon and bring them back safely to Earth. Apollo 1 tragically ended when all the astronauts on board were killed due to the fire in the command module during an experimental simulation. Apollo 11, on July 20, 1969, landed the first men on the moon, Neil Armstrong and Buzz Aldrin.

6. The Skylab was the first space station that the United States had launched into orbit. From 1973 to 1979, this 75 tonne station was in Earth’s orbit. It’s purpose was to study gravitational anomalies in other solar systems, but was curtailed due to lack of funding and interest. The station was visited by crew three times in 1973 and 1974.

7. The Apollo-Soyuz was the first joint flight of the U.S. and Soviet space programs. This took place in July 1975.

9. The United States and Russia are the two biggest partners in the largest space station ever built, the International Space Station. It was been difficult for NASA to justify the ISS because it costs over $ 100 billion dollars.

10. The 1990s was a difficult time for NASA, facing shrinking annual budgets due to Congressional belt-tightening in Washington D.C. NASA’s ninth administrator, Daniel Goldin, in response, pioneered the “faster, better, cheaper” approach that enabled NASA to cut costs while still delivering a variety of aerospace programs.

12. The current space policy of the United States is “execute a sustained and affordable human and robotic program of space exploration and develop, acquire, and use civil space systems to advance fundamental scientific knowledge of our Earth system, solar system, and universe.”

13. Ongoing investigations of NASA include in-depth surveys of Mars and Saturn and studies of the Earth and the Sun.

14. One NASA spacecraft is presently en route to Mercury and Pluto.

15. NASA’s itinerary covers over half of the solar system, with missions to Jupiter in the planning stages.

16. In 2011, an improved and larger planetary rover, Mars Science Laboratory, is slated to launch.

17. The New Horizons mission to Pluto was launched in 2006 and will fly to Pluto in 2015. The probe received a gravity assist from Jupiter in February 2007, which examined Jupiter’s inner moons.

18. The MAVEN spacecraft is on the horizon of NASA’s plans and is part of the Mars Scout Program to study the atmosphere of Mars.

19. The Vision for Space Exploration is the United States space policy that was announced on January 14, 2004, by United States President George W. Bush that in 2018, mankind will return to the moon and set up outposts as a testbed and a potential resource for future missions.

20. In 2010, the Space Shuttle will retire and be replaced by Orion by 2015, which is capable of both docking with the International Space Station and leave the Earth’s orbit.

22. NASA announced on December 4, 2006 that it was planning on building a permanent moon base.

24. The Administrator of NASA is the highest-ranking official and serves as the senior space science adviser to the President of the United States.

25. NASA remains to be the only space agency to have launched space missions to the outer solar system beyond the asteroid belt.

Nasa now appears divided over yesterday’s meeting between President Uhuru Kenyatta and Nasa Principal Raila Odinga.Nasa founder and co-principal Musalia Mudavadi is angry that the meeting took place at Harambee House without the involvement of other Nasa principals.Speaking in Mombasa Mudavadi said the talks are not in any way the dialogue they have been pushing for as Nasa