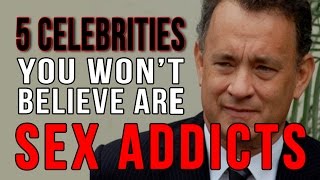 Actually, it usually looks more like this. But that doesn’t mean it’s just us regular joes who suffer from sex addiction. Here’s 5 celebrities who have publicly battled sex addiction.

First up: Michael Douglas. Given some of his recent roles–

You might not think of him as an object of lust. But a few years ago, he was the embodiment of sex.

In the early 90’s, Douglas became one of the first celebrities to check in to a rehab facility for sex addiction–though he would later claim he was only there for alcohol addiction.

Next up: R&B singer Eric Benet.

Though Benet has been making music for a while, his main claim to fame has been marrying–and then cheating on–Halle Berry.

Cheating on women as beautiful as Halle Berry is basically a war crime, so Benet enrolled in a sex- addiction clinic in 2002.

He later denied having a sex addiction, but has said that he is happier for having gone through the program.

Unfortunately, Duchovny took his work home with him. In 2009, he entered rehab for sex addiction.

Since his treatment, he has reconciled with his wife, actress Tea Leoni, and seems to be back on track.

Playboy model Nicole Narain burst onto the scene in 2005 when a sex tape of her with actor Colin Farrell made its way onto the internet.

Other signs of sex addiction include repeated use of prostitutes, constant visits to strip clubs, and sex with multiple anonymous partners.

This, of course, brings us to our final celebrity, Charlie Sheen.

Sheen has never admitted to sex addiction, but he has repeatedly exhibited the symptoms, most notably when he was outed for hiring call girls at Heidi Fleiss’s brothel in 1995.

To date, Sheen has not attempted to rehabilitate his behavior.

Sex addiction can be debilitating, ruining relationships and racking up expenses. It can also be brought on by a testosterone imbalance.