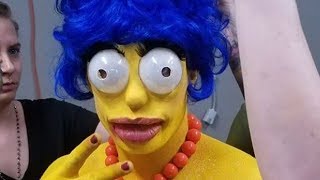 Thanks to Lyft for sponsoring today’s episode! It Matters How You Get There. Download and Ride Today. http://bit.ly/SignupLyft

Halloween is right around the corner, and if you’re anything like me, you still have NO idea what you’re going to dress up as. (Also since it’s a Tuesday you need a costume for Friday, Saturday AND Tuesday, so get those sewing machines out, those thrift store radars on, because we are about to give you some INSPO. Here are the best 7 Celebrity Halloween. Costumes so far.

Next up is the most adorable award – which obviously goes to Channing Tatum as a unicorn. It’s cute, committed and comfortable – What a perfect costume!

Vanessa Hudgens channelled her 90s baby-ness when she and pal GG decided to dress up as characters from the Craft with our girl as Nancy Downs herself.

One of the most committed and convincing costumes on our list? Jason Derulo as the Night King from Game of Thrones. He PERFORMED in this costume at the Maxim Halloween Party!

Bachelor franchise star donned a timely? Costume – dressing up as a the late playboy mogul Hugh Hefner. He even got a friend to come a long as bunny!

Model Erin Foster and a friend friend dressed up as Melania Trump and the president’s first wife Ivana in a commercial, so even if this doesn’t count as a Halloween costume, we’re still including it, because it’s so dang funny. She really looks it!

And last, but not least – we’ve got our girl, Jenna Dewan as a…fairy? Sure, it was for a pre-school party, but this just goes to show ANYthing can be a costume if you want it to be.

Anyway, that’s our list here on newsfeed – what are your favorite celebrity costumes so far AND do you have yours planned already?

Let us know all of your thoughts in the comment section below and when you’re done with that click right over here to check out more of Colton’s crazy costumes over the years.

Outro: This episode was presented by Lyft. It matters how you get there. Download and ride today.

Add us to your circles on Google+: http://google.com/+ClevverNews
Tweet Me: http://www.twitter.com/rainbsprinkles