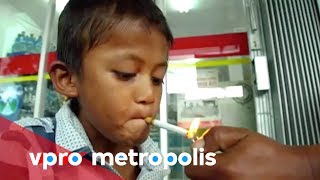 By now the whole world knows that smoking is bad for you. But if you’ve been smoking like a chimney since you were just 4 years old, it’s very difficult to quit. Ilham is now 9 and already did several rehab attempts, but he and his cigarettes remain inseparable…

vpro Metropolis was a video project by Dutch broadcast organisation vpro, that ran from 2008 to 2015. Metropolis is made by a global collective of young filmmakers and TV producers, reporting on remarkable stories from their own country/city. We made a trip around the globe on one single issue: from local beauty ideals to Elvis impersonators, to what’s it like being gay, or an outcast or a dog in different cultures.