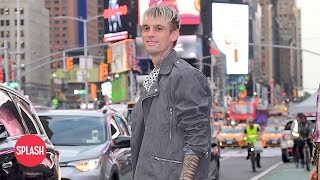 Aaron Carter gave an exclusive interview to Us Weekly, and he revealed that he thought he would be dead by the age of 30. But now that he celebrated the milestone birthday, he said it’s time to act like an adult.

Aaron Carter never thought he would be here today.

The former child star, who began performing at he age of 7 told Us Weekly that when he was growing up, he thought he would die by 30.

And to be honest, this summer he came pretty close.

Carter spiraled out of control after his father passed in May, then in July he was arrested for DUI and marijuana possession. A month later he split from his girlfriend Madison Parker, then in September police visited his Florida home for gun and safety concerns.

After that he checked into rehab.

Aaron was only 115 pounds when he entered treatment… saying he dealt with a lot of trauma, a lot of loss, and a lot of loneliness.

He said the 90-day program recharged him and after celebrating his 30th birthday on December 7th, he said it’s time to act like an adult.