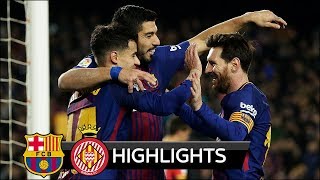 Girona led through Portu at Barcelona but Luis Suarez’s hat-trick, a Lionel Messi double and Philippe Coutinho’s strike turned it around.
Lionel Messi dazzled on his way to another career record as Luis Suarez hit a hat-trick in Barcelona’s 6-1 demolition of Girona.

Messi notched a superb brace and has now scored against 36 opponents in Spain’s top flight – more than any other player in the competition’s history.

Ninth-placed Girona have made waves in their debut LaLiga season and Pablo Machin’s side drew first blood at Camp Nou through Portu, the forward adding to goals against Real Madrid, Atletico Madrid and Valencia this term.

Barca’s response was brilliant, with Messi running through his full repertoire to put their Catalan neighbours in their place and move on to 30 in all competitions this season.

A 10-point lead over Atletico Madrid – who face a tricky trip to Sevilla on Sunday – was essentially secured by half-time, but Philippe Coutinho spectacular first league strike for the Blaugrana and Suarez’s treble gave the home faithful further reason to revel.

It was the first time Messi, Suarez, Coutinho and Ousmane Dembele were named in the same starting XI by Ernesto Valverde, but there is little doubt over who remains the master.