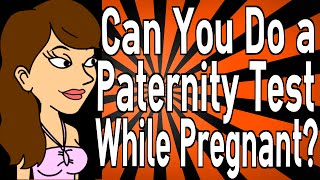 Can You Do a Paternity Test While Pregnant?

Can you do a paternity test while pregnant?

DDC came out with a prenatal paternity test in 2011, that analyzes the fetal DNA circulating in your blood for the kid’s genetic code. Natera does the testing now too, via blood tests for the adults.

Is that the only way to do prenatal paternity testing?

Before that test was invented, you could do a prenatal paternity test via amniocentesis or chorionic villus sampling.

I’ve heard that CVS comes with a miscarriage risk.

So does amniocentesis. However, the Non-Invasive Prenatal Paternity Test works at 9 weeks, whereas amniocentesis and CVS do not really work for another few months.

Another few months, and the kid will be born.

When you do the Non-Invasive Prenatal Paternity Test, they need both your DNA and the likely father’s. After a week or so, they’ll say included or excluded.

Given that the test is earlier, how accurate is it?

It is supposed to only mess up one in a thousand times. And the Journal of the American Medical Association said they can use the same technique to determine if it is a boy or a girl as early as seven weeks.

That’s just looking for a Y chromosome, whereas paternity testing is a lot more involved. What’s the difference between CVS and amniocentesis?

I’ve heard that CVS can be easier to do when the kid is earlier, since it may be hard to tell where the kid is in the amniotic sack early on.

And both of those can be done by the doctor taking a sample, whereas fetal DNA tests are only done at one of the approved paternity test labs.

I’d rather get it done soon, no matter the method.

Remember, they can also do it via a sample of the umbilical cord blood, as long as you ask for it in advance. After the kid is born, you can get the DNA sample by swabbing the kid’s cheek.

Try getting the kid to open their mouth.

The kid’s mouth is wide open screaming for food, security, warmth and half a dozen things every two hours. That is not a problem.

Once a guy is on the birth certificate, getting him off is a problem, so we need to know sooner rather than later.

Then do the blood tests with the potential fathers and get it over with. It is cheaper than the legal wrangling over legal paternity and child support later.

And a lot less stressful than Jerry Springer in a few years.