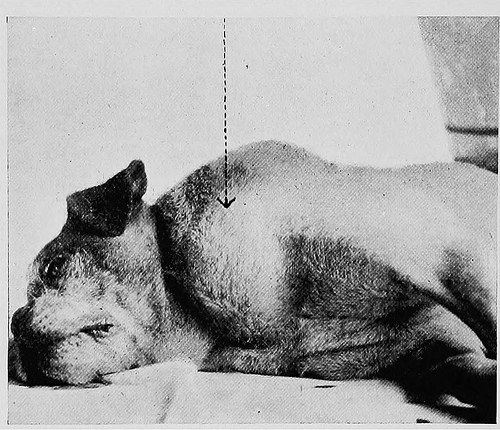 Cushing’s disease is considered a disease of middle age and older dogs.  The usual age of contracting the disease is around six or seven years. Studies have shown that most dogs had at least one symptom of the disease from one to six years before the diagnosed.

Because the symptoms occur so gradually, the owner often attributes the changes to “old age.”  Some dogs will have only one symptom, while others may exhibit many.

How can I tell if my pet is showing symptoms of Cushing’s disease?  The most common symptoms are the following:

(2) Increase in Appetite – dogs may begin stealing food, getting into the garbage and begging continuously.

Cushing’s disease is managed, not cured.  Treatment consists of several options, but non-surgical treatment is the most common since both adrenal and pituitary types of the disease respond effectively to oral treatments.

It is important for the pet owner to become familiar with this dreaded disease and to be aware of early intervention procedures that may prevent or facililtate the speedy recovery of your pet.

In 2004 a small study at the Belmont Pet Hospital to support the safety and efficacy of a product called DOGtorRx™ formula.

The study focused on aging dogs with orthopedic challenges and dogs with suspected or diagnosed Cushing’s disease. One participant, an aging Labrador Retriever with significant mobility problems, was taking Rimadyl and Glucosamine prior to the study with little results.

The owner was considering euthanasia. Within a very short time after adding DOGtorRx™ to his diet, the dog became as mobile as a puppy.

Nothing else was added or changed in his treatment. Now, two years later, this same dog is taking only DOGtorRX™ and no more drugs. Remarkable results were also shown on dogs with Cushing’s disease who became active and playful again once put on DOGtorRx™.

Dr. Ava V. Ackerman, DVM (Belmont Pet Hospital – California) say she has about 25 patients on DOGtorRx™ and the responses have been overwhelmingly positive.

Scientific research has proven that the natural agents of the DOGtor Rx  formula facilitate the production of cortisol and insulin in the physiologically optimal amounts, which naturally alleviates several common dog diseases.

In the wild, a dog would obtain these growth factors from the blood of their prey. They do not receive this even with the best of today’s diets.

Now is the perfect time to start your dog on a DOGtor Rx. regime.