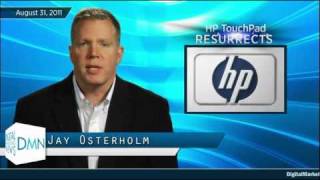 Story #1
HP announces production of more TouchPads
How sustainable is a lower-price point business model? According to the HP Company blog, the TouchPad is making a limited comeback. “Despite announcing an end to manufacturing webOS hardware, we have decided to produce one last run of TouchPads to meet unfulfilled demand.”
HP’s Touch Pad originally entered the tablet market priced at $499. Sales were dismal, and after only a few months HP discontinued the product line and cut prices to $99. Immediately following the price reduction, sales went through the roof, and many stores sold out within hours.
At first glance, this may seem like a sound business decision. By lowering the price point of the TouchPad, HP is no longer in direct competition with the market leading iPad, which is why they are experiencing a surge in sales. HP engaged an entirely different customer base with the $99 tablet than they did with the $499 tablet. However, this success cannot be long lived, as the customer base searching for a $99 tablet will soon be exhausted.
In order to maintain competition and sales, tablet manufacturers need to find the sweet spot between the price of the iPad and the extremely discounted HP TouchPad.

Continuing an emerging trend The London-based Financial Times removed its iPad and iPhone apps from Apple’s App Store and created a mobile browsing page. Many large companies including The Wall Street Journal and Walmart’s video service, Vudu, have done the same in an effort to circumvent Apple’s stringent app requirements, and we expect to see even more of it.
FT removed the app because they could not reach an agreement on subscription data ownership. In the old model, subscriptions were done through Apple’s system, meaning Apple kept the majority of their data.
By creating web-based apps, these companies are no longer limited to one mobile operating system — any phone with internet access, including the Droid and BlackBerry, is able to use the app.
This perpetuates the trend of companies allowing consumers to create their own experience on the platform of their choice.

Story #3
Google announces free calls to US for military members

Our military members make a great sacrifice every day though their service and staying in touch with them is not easy. This is all changing thanks to Google’s announcement yesterday. Members of the United States military with a valid .mil email address can use the calling feature in Gmail free of charge.
To use this new feature, military members can register their .mil email address with a Google account and install the voice and video Gmail plugin. They can then dial a US phone number and talk free.
Family members in the United States can use the service to call members of the military stationed overseas, but will be subject to a per minute rate.
Google also announced this week free calls within the US for anyone with a Google account. Both promotions will continue for at least the rest of 2011. We applaud Google for their efforts to make it easier to communicate with our loved ones serving abroad.