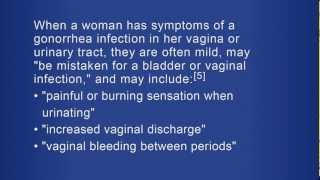 Do I Have Gonorrhea? Signs and Symptoms of Gonorrhea

Gonorrhea is a common sexually transmitted infection that often has no symptoms, can leave a woman unable to have children, and can be passed from the mother to child during childbirth. Having an active gonorrhea infection increases the risk you will get HIV or give it to someone else. HIV is incurable and can be fatal. Gonorrhea can be diagnosed with a test and can usually be cured with antibiotics. However, there is currently a worrisome increase in strains of gonorrhea that are resistant to antibiotics.

Signs and Symptoms of Gonorrhea

Most women with gonorrhea, and some men, will have no symptoms.

When a woman has symptoms of a gonorrhea infection in her vagina or urinary tract, they are often mild, may “be mistaken for a bladder or vaginal infection,” and may include:
• “painful or burning sensation when urinating”
• “increased vaginal discharge”
• “vaginal bleeding between periods”
When a man has a gonorrhea infection in his penis or urinary tract, he may have symptoms that begin from one to fourteen days after infection including:
• “burning sensation when urinating”
• “a white, yellow, or green discharge from the penis”
• “painful or swollen testicles”

Gonorrhea “infections in the throat may cause a sore throat, but usually” cause no symptoms.

Effects of Untreated Gonorrhea in Women
When not treated, gonorrhea can cause a woman to develop pelvic inflammatory disease, which in turn can cause:
• abdominal pain
• fever
• “chronic pelvic pain”
• infertility (inability to have a baby)
• ectopic pregnancy (pregnancy outside the uterus, which can be fatal)

By getting tested for gonorrhea and treated if you need it, you can protect your own health and your baby’s health too. So if you are pregnant, talk to your doctor right away, get tested for sexually transmitted infections, and follow the doctor’s instructions.

Gonorrhea is treated with antibiotics. Anytime your doctor gives you antibiotics, it’s vital that you take them on schedule until they are gone. If you don’t, it increases the risk that you won’t be cured and that you will develop an infection that is harder to cure.

[This video is freely downloadable from the Internet Archive at http://archive.org/details/DoIHaveGonorrheaSignsAndSymptomsOfGonorrhea. Visit http://www.GlobalLifeworks.org and http://AIDSvideos.org to learn more. Do you want to help prevent the spread of HIV/AIDS? Are you fluent in a language other than English? Then volunteer to translate our videos into other languages! Click http://AIDSvideos.org/translate.shtml to to learn how you can help!!! © Copyright 2011-2012 Global Lifeworks. All rights reserved. This work is licensed to be used for non-commercial purposes under the Creative Commons Attribution-NonCommercial-NoDerivs 3.0 United States License. To view a copy of this license, visit http://creativecommons.org/licenses/by-nc-nd/3.0/us/.]