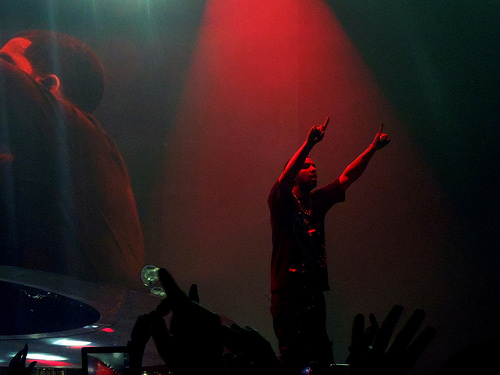 Toronto-bred rapper Drake may have released his debut album Thank Me Later as recent as this June, but that doesn’t mean he won’t release his sophomore album before 2010 is over. Fueling speculation that a new Drake album may come out sooner than later, Young Money president Mack Maine recently told MTV News, “Drake’s crazy. He’s doing a mixtape right now. He called me one night, like 2 in the morning. He has the intro done for the new album. We was discussing dates where he should come back. That’ll be soon.”

When asked point blank if fans can expect another LP from Drake before next summer, he replied, “Real possible! What we discussed, definitely, what me and him discussed.” Hip-hop fans will be waiting!

One of the most hotly-anticipated hip-hop albums of the year, Drake’s Thank Me Later has been riding high on the charts since dropping on June 15. Although Drake has been tight-lipped about the follow-up to his standout debut, the 23-year-old did offer up some news on his forthcoming mixtape. When speaking to MTV News at his recent OVO Festival in Toronto, Drake said, “I think I got a great body of work with that tape. I’m gonna do it like I do all my other takes. I’m gonna make a night out of it. Just make sure you’re on the Net that night downloading, and it’s yours. I feel like people deserve it.”

Drake’s first annual October’s Very Own Festival was held in Toronto on Aug. 1 and featured some of hip-hop’s finest, from Eminem and Jay-Z to Young Jeezy and Rick Ross.

Although Drake’s focus is clearly on his music, the rapper’s short-lived Twitter marriage to fellow Young Money star Nicki Minaj has been getting a lot of press lately. Billboard.com reports that one day after claiming they were married, Drake and Nicki Minaj took to the social networking site where it all began to “annul” their nuptials. Minaj (aka Harajuku Barbie) tweeted: “Dear Barbz, My husband Drake and I have decided to have our marriage annulled. We’ll maintain joint custody. Luv, HB.”

A fake Twitter marriage isn’t the first time the pair have collaborated, as Drake rhymes about marrying Minaj on his Thank Me Later track “Miss Me.”

Drake also recently collaborated with another one of Young Money’s finest, the label’s founder and his own mentor Lil Wayne. Wayne is current behind bars, but Billboard.com reports that Weezy and Drake released a new single on Aug. 3. New York radio station Power 105.1’s DJ Clue was the first to debut Lil Wayne’s “Right Above It,” which features a cameo by Drake.

“I want to tell you something that you probably should know, it’s that Slumdog Millionaire Bollywood flow,” Drake raps in the beginning of the track, which will be the lead single off Lil Wayne’s I’m Not A Human Being EP.

Lil Wayne is expect to finish his sentence at Rikers Island in early November, which means fans with Drake tickets may see him pop in on one of this protege’s shows this fall. Drake has dates lined up in cities like Miami, Fla.; New York, N.Y.; Washington, D.C.; Greensboro, N.C.; Atlanta, Ga.; Chicago, Ill.; Bloomington, Ill.; Detroit, Mich.; Lowell, Mass.; Houston, Texas; Denver, Colo. and more through November.