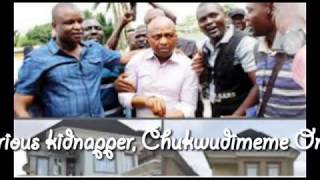 Notorious kidnapper, Chukwudimeme Onwuamadike, aka Evans have highlighted some of the states that he operated before he was arrested by the police – Evans said he only operated in the places that he knows very well because he felt that it is not right to go anywhere he doesn’t know – Force Public Relations Officer (FPRO) Jimoh Moshood said police are planing to arraign Evans in court Suspected billionaire kidnapper, Chukwudumeme Onwuamadike aka Evans, has revealed a shocking revelation on why he did not operate in Yoruba land other than Lagos. Evans on Monday, June 26, said he liked operating in the states like Enugu, Abia, Lagos and Edo states because he is from Anambra state. New Telegraph reports that the suspected kidnapper further said there is no justifiable reason for him to operate in his state of origin. He said: “Police tracking located me in Anambra State, but it was not because I committed robbery or even kidnapped anyone there. ‘’If I kidnapped someone in Lagos, I sometimes go to Anambra State to collect the ransom, just to avoid detention. ‘’No! I have never operated in any Yoruba state, let alone Oyo State. I have never operated there; Lagos is my state. I mostly operated from Lagos. ‘’Moreover, I also didn’t like operating in Yoruba states because I don’t know my way around there. I don’t know the terrains.
”It is not right to go where you don’t know, except you have someone that can lead you.” We gathered that Evans however said that the public should discard a lot of ‘lies’ flying in social media. He said: “There was never a time I said I got victims from Facebook or that my wife used to collect ransom on my behalf. I did not also say there are important personalities working with me in the East.” Meanwhile, Force Public Relations Officer (FPRO), Mr. Jimoh Moshood, said police are yet to arraign Evans in court. Moshood said that that the judicial process for his conviction will “soon begin before a court of competent jurisdiction”.
He said: “Evans is going to be taken to court very soon, on completion of investigation. He will be tried before a court of competent jurisdiction.” Meanwhile, we earlier reported that the police have revealed their plan on Evans after investigation. Olarinde Famous-Cole, the spokesperson for the state police command, on Monday, June 25, said that Evans would be arraigned after the police have completed their investigations. The security agency said it is still taking an inventory of Evans’ criminal activities.
Please Subscribe: https://goo.gl/5VGvtm