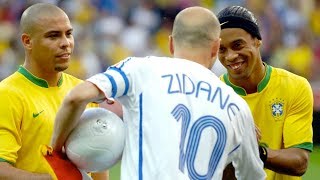 No one knows since when film and cinema have become a vital part in people’s life. Kinds of films like horror, action, romantic, Korean, or detective films are considered mental foods, which help us relax and broaden our knowledge about the wide world. And during World Cup 2010 season, film lovers can’t miss following movies beside excellent football match. In those movies, the main characters are King of football, Pele, famous players such as Maradona, Zidane or Beckham.

“Zidane: A 21st Century Portrait” is a documentary focused on Zidane during Real Madrid vs. Villarreal CF game on April 23, 2005 at the Santiago Bernabéu Stadium. Most images in the movie were integrated with the video data, the speech of his colleagues as well as important milestones in the life of this world champion. The film has touched millions of viewers on talented player.

“Shaolin Soccer” is a Hong Kong comedy film co-written and directed by Stephen Chow, who also stars in the film. Humor and fun with the dramatic dialogues drama and excellent ball hits, “Shaolin Soccer” is regarded as one of the best football films in the world with the participation of Miss Zhao and comedy king Stephen Chow. The film is about a former Shaolin monk who reunites his five brothers to apply their superhuman martial arts skills to play soccer and bring Shaolin kung fu to the masses.

“In The Hands of the Gods”

“In the Hands of the Gods” follows five English freestyle footballers as they try to raise money by showcasing their skills, so that they can afford their trip to Buenos Aires to meet their idol Diego Maradona. In the film, there are not many dramatic scenes or eye-catching kicks like other football movies, but “In the Hands of the Gods” is loved by the sports fan favorites for its close and realisstic content. That is very strong love for football of boy fans.

Poster of “In The Hands of the Gods”

“Bend It Like Beckham”, a drama film, was directed by Gurinder Chadha. Although David Bekham does not appear in the film, he becomes the inspiration for “Ben It Like Beckham”. The film has attracted the attention of football fans worldwide for its meaningful content and gender equal message. It is about Jess Braham, an Indian girl living in Britain, who desires to play football and idol David Beckham. She has overcome many obstacles to pursue her dream when joining a female team.

“Escape to Victory” is about Allied prisoners of war who are interned in a German prison camp during World War II. Though released over 30 years ago, “Escape to Victory” is always mentioned when talking about the connection between football and picture motion. Many Hollywood filmmakers have idea of remaking this film.

Poster of “Escape to Victory”

* Copyright Disclaimer Under Section 107 of the Copyright Act 1976, allowance is
made for “fair use” for purposes such as criticism, commenting, news reporting,
teaching, scholarship, and research.