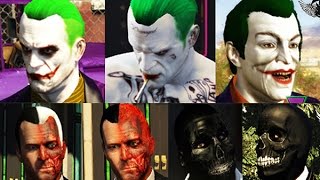 Interpretations of the Joker’s appeareance in other media include Cesar Romero’s in the 1960s Batman television series, Jack Nicholson’s in Tim Burton’s Batman, and Mark Hamill’s in Batman: The Animated Series, other DC Animated Universe shows and the Batman: Arkham games. Heath Ledger signed to play the Joker in July 2006, for director Christopher Nolan’s Batman Begins sequel, The Dark Knight and won a posthumous Oscar for his performance. Jared Leto will portray The Joker in Suicide Squad.

Harvey Dent was Gotham City’s amiable and courteous district attorney and one of Batman’s strongest allies until Sal “Boss” Maroni threw acid in his face, hideously scarring him. It also fractured his mental state, causing him to become Two-Face, a schizoid criminal mastermind obsessed with duality and the number two. His former good luck charm, a “two-headed” silver dollar with one side deface has been seized on as a reflection of Dent’s half-scarred visage. He flips it to decide the fates of his victims.

Roman Sionis, a former business executive and mafia boss who originally hated Bruce Wayne rather than Batman, wears a black wooden mask and leads the cult like society of False Facers. Saved by a buyout by Bruce Wayne, Sionis came to resent and hate Wayne. Fixated on the concept of masks, Sionis carved one from his father’s black coffin and sought revenge; his ensuing battle with the Dark Knight caused his mask to be burned into his skin, remaking him as the Black Mask.