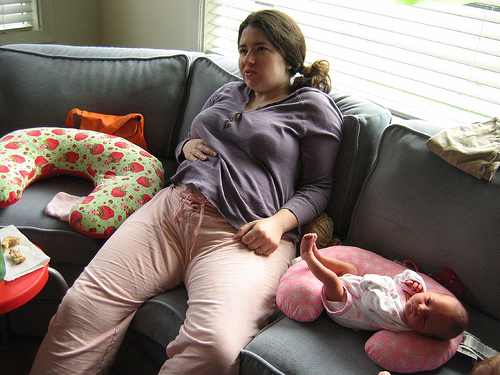 A child’s birth in the family brings with itself a whole lot of happiness for the mother and the family. A combination of emotions is experienced by the mothers, which include the joy of giving birth to another life, while the fear that comes along naturally. It is considered to be the most important and blessed moment of a woman’s life, however in some cases it may lead to severe depression among them.

Any such woman, who has just given birth and is not considering this to be the most blissful moment of her life, is not alone. There are approximately 80% of mothers who go through severe disturbances in their moods after childbirth. Most of the time, emotions such as being upset, afraid and unhappy do not tend to stay for a long time in the mother’s life.

However, when these emotions tend to intensify and become much more severe in nature, they are known as symptoms of postpartum depression. Occurring just after the baby is born; most women may feel terrible about not loving their babies and acting as most mothers are supposed to. But, it should not be looked down upon as being a weakness in the woman’s personality; it is just a complication that occurs mostly due to hormonal imbalances, which leads to such emotions.
One may start to realize that the symptoms are more severe in nature and not the same as “baby blues” if they do not seem to go away for a long period of time. The following are a few examples of the kind of symptoms one may go through:

The new mother may face a loss of appetite and would not feel like eating anything. Disturbances in sleep are also faced as, in some cases, it may turn into insomnia. Other symptoms include being easily irritated and angry, and not being able to find joy in any situation. These women may also start considering themselves as being sexually unattractive, which would result in lack of interest in sex. For feeling this way towards the baby, the mother may also feel guilt and shame.

Even if the child would be healthy, the mother may spend hours worrying about his or health and wellbeing. Most of these are, of course, just imagined scenarios but for them, it may feel like a real and worrisome situation.

Suicidal thoughts are also common, which makes the situation more difficult to control. In such a case, precautions and treatment becomes essential.