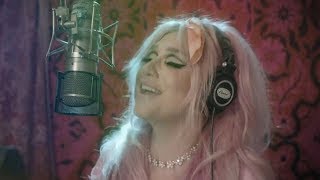 Kesha gets vulnerable in a letter to her 18-year-old self and spills a shocking detail about her new song Rainbow.
Buckle up, guys! Kesha’s about to make us all even more emotional… If that’s even possible.
Kesha recently opened up on CBS’s This Morning’s “Note To Self” series, where she wrote a vulnerable letter to her 18-year-old self. In the letter, Kesha talks about many of her struggles, including “crippling anxiety”, fear of failing, Internet hate, and even an eating disorder.
Though I’m sure these times were incredibly hard for Kesha, they did lead her to create some amazing music, including one song in particular that is now the title of her new album.
Kesha opened up about the origin of her song Rainbow on NPR and how for her, it meant the hope for a brighter future, saying QUOTE “‘Rainbow’ was the first song I wrote for this record. I was in rehab for my eating disorder. I was sitting on the floor, and I had begged the head of the rehab to let me have a keyboard for one hour a day, and finally she relented. And for that one hour a day I played and wrote ‘Rainbow.’ ‘Rainbow’ was just my promise, my letter to myself that things would get better. It was my mantra, because at the end of a storm comes a rainbow…” Well, if that doesn’t get you emotional, I don’t know what will.
During her time in the treatment center, her verbal, emotional, physical, and sexual abuse from Dr. Luke was still unknown to the public, though she apparently did share what was going on with some fans when writing letters to them from inside the rehab facility. The battle between Kesha and Dr. Luke is still ongoing, but luckily Kesha has been able to release her new music, despite this.
Woo, a lot to take in but right now I want to hear from you guys. What do you think of Kesha’s emotional letter and new music? Let me know all of your thoughts in the comments below. When your done with that click right over here to check out Fifth Harmony opening up about some of their highs and lows and as always, don’t forget to hit that subscribe button. I’m your host Renee Ariel and I’ll catch you next time!

Add us to your circles on Google+: http://google.com/+ClevverNews
Tweet Me: http://www.twitter.com/@ReneeAriel