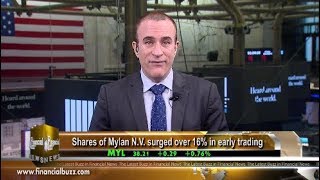 On Monday, the ISM manufacturing index for September rose 3.4% to 60.8, a 13 year high. Construction spending for August rose .5%, compared to the prior month’s .6% decline. 10 year Treasuries closed at 2.34% and the Dow Industrials, S&P 500 and Nasdaq composite all closed at record highs.

On Wednesday, the ADP employment report for September rose 135,000, and the ISM non-manufacturing index for September rose 4.5 points to 59.8, its highest level in more than 3 years. The EIA petroleum status report for the week ending September 29th fell 6 million barrels. On the strength of stronger than expected economic reports, markets ended the day slightly higher and all three major U.S. indexes closed at record highs.

On Thursday, jobless claims for the week ending September 30th fell 12,000 to 260,000 and factory orders for August rose 1.2% compared to the prior month’s 3.3% decline. The VIX volatility index closed at 9.19, its lowest close ever since it was created in 1993. The House passed a $4.1 trillion budget and markets rallied on optimism over tax reform. All three major U.S. indexes closed at record highs.

On Friday nonfarm payrolls for September fell 33,000, blamed on the hurricanes, however, the drop was much sharper than expected. The unemployment rate fell two-tenths of a percent to 4.2%, and average hourly earnings rose .5%. Markets opened lower on the news. Now let’s take a look at some stocks.

Endocyte Inc. (NASDAQ: ECYT) announced on Monday an exclusive worldwide license of its radioligand therapy that specifically targets the prostate membrane antigen. It is present in approximately 80% of patients who suffer from a specific type of metastatic prostate cancer. Endocyte is moving into Phase 3 of its PSMA-617 therapy. Company shares reached a new 52 week high of $6.55 on Thursday.

Celsion Corporation (NASDAQ: CLSN) announced on Tuesday its final clinical data from its OVATION Study at the American Association of Cancer Research Special Conference. The study was a Phase 1b clinical trial combining GEN-1, Celsion’s DNA immunotherapy, with the standard treatment for patients suffering from Stage 3 and 4 ovarian cancer. Celsion reached over $7 per share Wednesday morning.

On Wednesday, shares of Mylan N.V. (NASDAQ: MYL) surged over 16% in early trading after the U.S. Food and Drug Administration approved the company’s version of copaxone. The drug is used for the treatment of patients with relapsing forms of multiple sclerosis, an immune system disorder of the central nervous system. The company is producing a generic version of the drug to offer cost savings to consumers.

Constellation Brands Inc. (NYSE: STZ) reported its second quarter earnings Thursday morning and topped earnings estimates. The company had a strong quarter due to its marketing campaign: 120 Days of Summer. The campaign bolstered its beer business and market share gained throughout the summer. Constellation shares were up 4% on the news.

© 2011 Financial Buzz. All rights reserved. No portion of FinancialBuzz.com may be duplicated, redistributed or manipulated in any form without our consent, violators will be prosecuted to the full extent of the law.