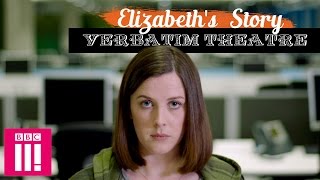 Alexandra Roach tells the story of Elizabeth. This is the last of three personal accounts, delivered by actors, of people who have benefited from services that receive Comic Relief funding.

If there are themes in this video that have affected you, information and support based in the UK may be found on the BBC’s Action Line site – http://www.bbc.co.uk/actionline.
—
Click here to subscribe to BBC Three: http://bit.ly/BBC-Three-Subscribe

Did you know that we’re up to other things in other places too?

Oh, we’re on Snapchat too – just incase you were wondering… add us, bbcthree.