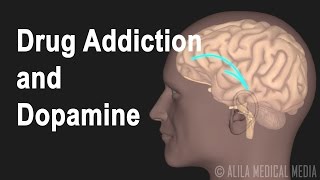 Mechanism of Drug Addiction in the Brain, Animation.

This video and other related images/videos (in HD) are available for instant download licensing here : https://www.alilamedicalmedia.com/-/galleries/images-videos-by-medical-specialties/neurology
Voice by: Khoi Dao https://www.youtube.com/channel/UCUVwfU6HxUVO65VqDNaohBQ
http://www.khoidaovoice.com/
©Alila Medical Media. All rights reserved.
All images/videos by Alila Medical Media are for information purposes ONLY and are NOT intended to replace professional medical advice, diagnosis or treatment. Always seek the advice of a qualified healthcare provider with any questions you may have regarding a medical condition.
Addiction is a neurological disorder that affects the reward system in the brain. In a healthy person, the reward system reinforces important behaviors that are essential for survival such as eating, drinking, sex, and social interaction. For example, the reward system ensures that you reach for food when you are hungry, because you know that after eating you will feel good. In other words, it makes the activity of eating pleasurable and memorable, so you would want to do it again and again whenever you feel hungry. Drugs of abuse hijack this system, turning the person’s natural needs into drug needs.
The brain consists of billions of neurons, or nerve cells, which communicate via chemical messages, or neurotransmitters. When a neuron is sufficiently stimulated, an electrical impulse called an action potential is generated and travels down the axon to the nerve terminal. Here, it triggers the release of a neurotransmitter into the synaptic cleft – a space between neurons. The neurotransmitter then binds to a receptor on a neighboring neuron, generating a signal in it, thereby transmitting the information to that neuron.
The major reward pathways involve transmission of the neurotransmitter dopamine from the ventral tegmental area – the VTA – of the midbrain to the limbic system and the frontal cortex. Engaging in enjoyable activities generates action potentials in dopamine-producing neurons of the VTA. This causes dopamine release from the neurons into the synaptic space. Dopamine then binds to and stimulates dopamine-receptor on the receiving neuron. This stimulation by dopamine is believed to produce the pleasurable feelings or rewarding effect. Dopamine molecules are then removed from the synaptic space and transported back in to the transmitting neuron by a special protein called dopamine-transporter.
Most drugs of abuse increase the level of dopamine in the reward pathway. Some drugs such as alcohol, heroin, and nicotine indirectly excite the dopamine-producing neurons in the VTA so that they generate more action potentials. Cocaine acts at the nerve terminal. It binds to dopamine-transporter and blocks the re-uptake of dopamine. Methamphetamine – a psychostimulant – acts similarly to cocaine in blocking dopamine removal. In addition, it can enter the neuron, into the dopamine-containing vesicles where it triggers dopamine release even in the absence of action potentials.
Different drugs act different way but the common outcome is that dopamine builds-up in the synapse to a much greater amount than normal. This causes a continuous stimulation, maybe over-stimulation of receiving neurons and is responsible for prolonged and intense euphoria experienced by drug users. Repeated exposure to dopamine surges caused by drugs eventually de-sensitizes the reward system. The system is no longer responsive to everyday stimuli; the only thing that is rewarding is the drug. That is how drugs change the person’s life priority. After some time, even the drug loses its ability to reward and higher doses are required to achieve the rewarding effect. This ultimately leads to drug overdose.