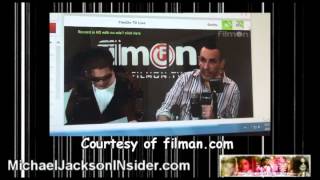 Here is a copy of the Press Conference regarding the DNA test of Michael Jackson and Brandon Howard.

Courtesy of FILMON.com sorry for the typo

Brandon Howard better known as BHoward grew up with the Jacksons, spent weekends and summer at the Jackson’s Hayvenhurst Compound. His mother, R&B singer, Miki Howard (nickname Billie because she loved Billie Holiday reference to song Billie Jean) was managed by MJ’s father Joe Jackson during the time of conception and that makes it a reality that Brandon Howard could really be the biological son of Michael JOE Jackson.

Side Note: MJ’s brother, Marlon had a twin whose name was Brandon, who died at birth. So again matches with the high probability that Michael Jackson is the father of Brandon Howard.

Furthermore, Brandon has produced music for Latoya and MJ’s brother’s son 3T and went to Japan in 2010 with MJ’s brother’s (Randy and Jermaine’s) ex-wife Alejandra, daughter Genevieve and other Jackson family members. Genevieve Jackson is also in Brandon’s music video.

Here’s an interview I did with Brandon Howard: