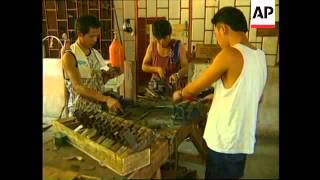 Cebu province in the Philippines is known for its beautiful beaches and resorts.

But Cebu is known to Filipinos for its illegal gun-manufacturing centred in the city of Danao.

Recently, the government has approved licences for two gun manufacturing companies in Danao.

But some remain in operation even without a permit, and this is likely to continue.

Byron Garcia is testing what he calls an “uzi-gram”.

It’s one of the products being manufactured by the Danao Arms Manufacturing Corporation, or Damcor – the first licensed gun manufacturer in Danao City.

The city of Danao, in the Philippine central island of Cebu, has always been notorious as the centre of illegal gun manufacturing.

Here, thousands of residents have been involved for decades in what is virtually considered a cottage industry, making home-made guns, popularly known as “paltik”.

By establishing Damcor, Garcia has legalised gun manufacturing in Danao.

Damcor specialises on the 38-revolver, and is also producing machine pistols and shotguns mainly to supply the country’s security agencies.

Garcia has invested more than 40 (m) million pesos in Damcor, some of which were spent on machines with state of the art technology to produce some of the gun parts.

But most of the work is left for the 70 workers that Garcia has employed since his company opened last year.

Most of their experience is based on what they’ve been clandestinely doing in their backyard for years.

30-year old Lito Gonzales was into illegal gun making for ten years before he decided to work for Damcor.

Here, he earns about 600-dollars a month, and is free from the anxiety of being arrested by the authorities.

SOUNDBITE: (Tagalog)
“Now, we’re okay here, because we don’t need to worry about being arrested today or tomorrow, that the police will arrest us because it’s illegal to do guns outside. No more.”
SUPER CAPTION: Lito Gonzales, worker Danao Arms Manufacturing Corporation

But despite the entry of Damcor and another licensed gun company, Garcia believes that the illegal gun- manufacturing industry in Danao will continue to flourish, mainly because of the lack of political will to remove it.

And for most of the illegal gun makers in this city, making the “paltik” in their backyards will surely be a hard habit to break.

For 20-year-old Julius Capuyan, it’s the only job he’s known since he was 13 years old.

SOUNDBITE: (Tagalog)
“There’s no other way of life for us here. We’d rather live this way, illegally making guns.
SUPER CAPTION: Julius Capuyan

Most of the people in Danao have relied on this illegal industry as their livelihood for decades making the government’s job of curbing the unlicensed gun-manufacturing operations a difficult task.