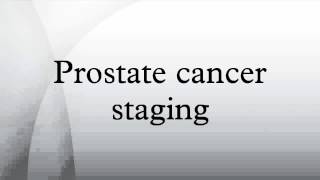 Prostate cancer staging is the process by which physicians categorize the risk of cancer having spread beyond the prostate, or equivalently, the probability of being cured with local therapies such as surgery or radiation. Once patients are placed in prognostic categories, this information can contribute to the selection of an optimal approach to treatment. The information considered in such a prognostic classification can be based on physical examination, imaging studies and blood tests (so-called “clinical stage”), or based on the extent of disease as revealed in a surgical specimen (so-called “pathologic stage”).
There are two schemes commonly used to stage prostate cancer. The most common is promulgated by the American Joint Committee on Cancer, and is known as the TNM system, which evaluates the size of the tumor, the extent of involved lymph nodes, and any metastasis (distant spread) and also takes into account cancer grade. As with many other cancers, these are often grouped into four stages (I–IV). Another scheme, now used less commonly for research, but often still used by clinicians, is the Whitmore-Jewett stage.

This video is targeted to blind users.