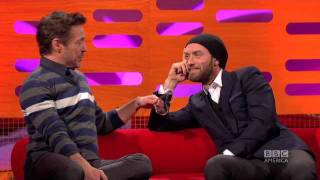 Here, Robert Downey, Jr & Jude Law share a hysterical story from their practical joker misadventures on the set of Sherlock Holmes: A Game of Shadows… Sounds like Sherlock & Watson needs to work on their observational skills, eh?

And keep up with all of the best shows on BBC America by following us on Facebook and Twitter!
Tweets by BBCAMERICA
http://www.facebook.com/bbcamerica