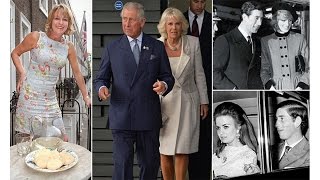 Certainly, Camilla appealed to Andrew Parker Bowles, then an officer in the Household Cavalry. But so did other women: during his on-and-off relationship with her, Parker Bowles also enjoyed romances with Princess Anne and Lady Caroline Percy, the daughter of the Duke of Northumberland.
Camilla despaired. And launched into a couple of dalliances of her own — first with Rupert Hambro, the handsome scion of a prominent banking family. Then, when she was 25, she caught the eye of the 23-year-old Prince of Wales.

What appealed to Charles more than anything was that ‘she talked to him’ and ‘always listened,’ said a man who was close to her during those years.
In Camilla, the Prince found not only a sympathetic ear but also warmth, vivacity and a goofy sense of humour.

The game was up: Parker Bowles duly proposed to his girlfriend of nearly seven years. Charles heard the news while docked at English Harbour in Antigua, and felt blindsided. He now had ‘no one’ to return to. ‘I suppose the feeling of emptiness will pass eventually’. Andrew Parker Bowles and Camilla Shand were married in a Catholic ceremony at the Guards’ Chapel in London on July 4, 1973.

At 1977, Camilla was pregnant with her second child, Laura but her marriage had become little more than a sham. At the end of 1978, Charles and Camilla resumed their love affair. It remained clandestine, but the sparks were noticeable to anyone paying attention. Emma Soames, once observed the ardent way the Prince looked at Camilla when he walked into a party in London. ‘It suddenly hit me, my God, he’s in love with her,’.

She remained impassive and made no reply, but she put the word out that Camilla was not to be invited to any royal events.
The Queen Mother took similar steps, though she was so fond of Parker Bowles that she continued asking him to join her in the royal box at the Cheltenham Races without his wife. Neither the Queen nor Prince Philip spoke to their son about his behaviour, and Parker Bowles himself appeared to be unconcerned about his wife’s infidelity.

Prince Charles was present, too – he’d actually travelled there with Camilla.
During a dinner in Government House on the first night, the lovers were reported to be flirting so openly, said Edward Adeane. So content was Prince Charles that it’s likely he would have remained a bachelor, had he not felt under pressure to produce an heir. So, in 1981, he married Diana Spencer — after she’d been vetted and approved by his accommodating mistress.

He insists that he rekindled the affair with Camilla only in 1986, when his marriage was beyond repair. She still had a distinctive allure, and she was as non-threatening as she was comforting. After years of his wife’s averted eyes and furtive, changeable manner, Charles found much-needed reassurance in Camilla’s direct gaze and appreciative smile. Her laughter was throaty, genuine and complicitous. And, unlike Diana, she didn’t try to score points against him.

Parker Bowles, for his part, spent weekdays with his regiment in London, where he continued to have indiscreet affairs. When told he was a model for an ‘upper-class bounder’ in one of Jilly Cooper’s bonkbuster novels, he said: ‘I took it, and continue to take it, as a great compliment.’ As his love affair with Camilla intensified, Charles made stealth visits to her when Diana and the boys had returned to London on Sunday afternoons.

It didn’t take long for Diana to discover his treachery. ‘What really galled me was when Diana and Charles would visit friends for a country weekend, and Diana would leave early to take the boys to school,’ recalled one of her friends. ‘Diana would go through one gate and Camilla would enter through another.’

Andrew and Camilla Parker Bowles announced their divorce in a statement from their lawyers on January 10, 1995. ‘Throughout our marriage we have always tended to follow rather different interests,’ they said with admirable understatement, ‘but in recent years we have led completely separate lives.’

As for Charles, he still adored her, yet — bizarrely — seemed in no hurry to make an honest woman of his lover. In 2004, seven years after Diana’s death, it was his staff who took the initiative, conferring with government and church officials to create a path to the altar.
‘Getting him married wasn’t easy,’ said Clarence House adviser. ‘The Prince was perfectly happy the way it was.’
The Queen, for her part, was genuinely pleased when the couple finally tied the knot: she liked Camilla’s down-to-earth unfussiness and her love of dogs. The two women spoke regularly on the phone — and the Queen shrewdly started using her as a conduit to her complicated and often angst-ridden son.