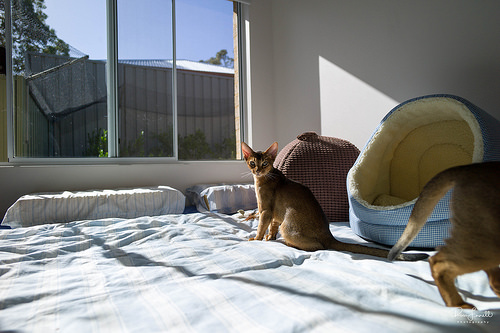 Recently, two Serval cats were delivered to the Caldwell Zoo in Tyler, Texas. The nine month old cats are named Bosco and Amos. The kittens came from the Tautphaus Park Zoo in Idaho Falls, Idaho. The Serval cat is considered one of the best hunters in the wild with the ability to catch it prey over 50% of the time.

A Serval cat is a medium sized African wild animal. It is a strong, slender cat with long legs and relatively short tale. It has a small head and oval ears. The fur of the animal is striped on the head and back of the neck and the body is spotted. The coloring is tawny with black stripes and spots. The Serval has traits similar to the cheetah. From a distance, a Serval will resemble a cheetah but up close the Serval is a smaller animal. A Serval cat will weigh from 20 to 50 pounds. It has a lifespan of 12 to 15 years. Besides it’s normal sounds, it can purr like a domestic cat.

The Serval cat lives in savannas and likes to feed on rodents. It will feed on other prey like fish, frogs and insects if it finds them. A Serval is very fast and has excellent jumping ability making it a good hunter. The cat tends to eat quickly causing it to regurgitate it’s food. If the prey is small enough , it will swallow it whole. It is also a very intelligent animal enabling to outwit it’s prey. Although the Serval does very little, it is a great swimmer. Larger cats like the leopard prey on the Serval.

The cat is normally bred in the wild but can also be bred in captivity. In the wild, the young are raised in sheltered locations for protection from bigger cats. The litter can contain up to five kittens. A kitten can mature to an adult in as little as 190 days.

A Serval cat can be domesticated. The animal is friendly, good-natured and easily tamed. But like any wild animal, the cat may become destructive and dangerous before fully grown. A Serval is very loyal to it’s owner and is difficult to transfer to a different owner. The cat popularity’s as a pet has increased in the United States. In the United States, a special license is required to have a Serval as a pet. A Serval has been bred with a domestic cat called the Savannah. Most states consider the Savannah as a domestic cat and do not put special conditions on the breed.

The Serval population has been shrinking due to humans encroaching on it’s habitat and hunting the animal for it’s fur. Since the Serval is a relatively small cat, it takes numerous pelts to make a garment. In many countries, the Serval has become a protected species. The CITES organization has put the Serval on it’s watch list.

This article does not endorse or recommend a Serval cat as a pet.