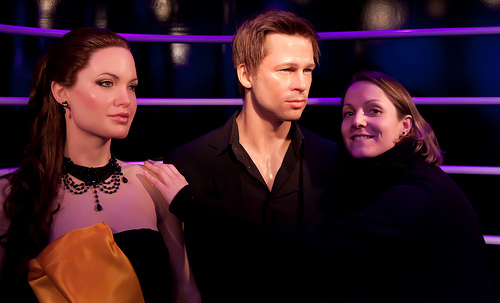 Hollywood kids are also exposed to the limelight almost as much as their famous parents. Getting a little inspiration from the parents, celebrity kids have defined their own sense of style. While Suri Cruise, Tom Cruise and Katie Holmes daughter, often wears pink gowns and high heels for casual outings with her parents, four-year old Shiloh Jolie-Pitt opts for peacoats and Adidas kicks. At the tender age, she pushes boundaries with her tomboy attire, wearing paperboy caps, boy’s neckties, and sporting polo shirts.

On September 15, Brad Pitt and Angeline daughter was spotted stomping through Los Angeles International Airport in grey shorts, a polo shirt and chunky “bovver boots”. The little jet-setter carried a green backpack while stomping LAX with her five-year old sister Zahara and her mother Angelina. The Oscar-winning actress said that Shiloh enjoyed dressing like a boy and wearing boy’s everything. Shiloh is one of Angelina’ three biological children including twins Knox and Vivienne.

Angelina recently returned from a trip to Pakistan as part of her work as a US Goodwill Ambassador. She said that all her children are aware of her philanthropic efforts. She will soon be gearing up to promote her new film “The Tourist”, whose new trailer has been released, showing the Hollywood stars sharing a passionate kiss.

Angelina Jolie held the hands of her children Zahara and Shiloh, walking through Los Angeles International Airport on her way to catch a flight out of Los Angeles.

Angelina walked hand in hand with Shiloh and Zahara.

During a trip to Pakistan, Angelina spoke out against the threat of a Florida church to burn a Quran.

Angelina says all her children are aware of her philanthropic efforts.