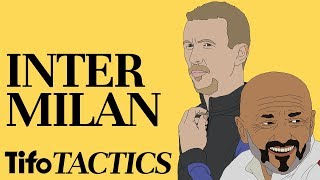 A tactical look at Inter Milan under current coach Luciano Spalletti. Brought to you by OneFootball THE football app to have: https://tinyurl.com/Tifo-March

This season, Inter Milan have performed above the expectations set by the last few years. Since Brazilian Leonardo left at the end of the 2011/12 season, in which Inter won the Coppa Italia and reached the Champions League quarter finals, things off and on the pitch have been in decline. Manager Luciano Spalletti, who oversaw Roma’s exhilarating 2005/06 season during a four year spell at the end and has also had success with Zenit St. Petersburg in Russia, is Inter’s ninth boss in eight seasons, excluding caretaker stints; three of those, Rafa Benitez, Gian Piero Gasperini, and Frank de Boer all lasted less than a year.

Produced by Tifo Studios: Taking an illustrated look into the beautiful game. Official Media Partner of the Bundesliga.