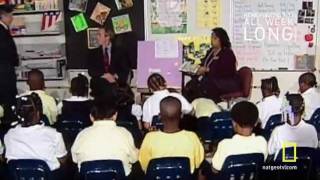 No generation in American history has matched that of the founding era for its array of talented and influential political thinkers and actors. John Adams, Benjamin Franklin, Alexander Hamilton, Thomas Jefferson, James Madison, and George Washington all possessed certain traits of character and intellect that significantly shaped the new United States of America and its direction for generations that followed. Among these personalities, George Washington is the most difficult for students to know. Compared to Jefferson, Hamilton, or most other important historical figures, our common images of Washington — seen on the dollar bill and quarter, crossing the Delaware River, or enshrined in the impersonal Washington Monument — are cold and distant. Today’s perceptions of Washington seem to validate Ralph Waldo Emerson’s maxim, “Every hero becomes a bore at last.”
Do most students understand the importance of George Washington as a military and political leader during a time that demanded extraordinary leadership? The bicentennial of Washington’s death in 1999 is an appropriate time to reflect upon his role and place in the school curriculum.
THE IMPORTANCE OF THE “GREAT PERSON” IN HISTORY
By what criteria should educators decide to emphasize a person in history? Extraordinary goodness or virtue should not be the sole standard (Patrick 1992, 12-13). Instead, the touchstone for inclusion should be whether an individual’s achievements have significantly shaped events in his or her country or the world. By this criterion, George Washington merits strong emphasis in the school curriculum. Richard Brookhiser reminds us in “Founding Father: Rediscovering George Washington” (1996, 9) that teachers often stress impersonal forces of history and neglect individuals: “Thus the American Revolution was a triumph of Democracy or the Enlightenment. As reductionists, we believe that the historical figures, who floated like chips in the intellectual backwash, attached themselves to the cause for trivial motives, often sordid. We have lost the conviction that ideas require men to bring them to earth.”
George Washington was one such “great person” whose life and character helped to bring grand ideas about people and governments to earth at the core of a new nation. Washington, however, was not without his faults. Though he disapproved of slavery and ultimately freed all his slaves in his will, he and his wife, Martha, owned more than 300 slaves. And while generally a man of very sound judgment in military and political affairs, he made serious mistakes, such as his precarious disposition of troops on Long Island in April of 1776, and his support of the Alien and Sedition Acts of 1798. Nevertheless, he was a person whose personal attributes and life significantly shaped the United States of America and the world, and from whom students have much to learn.
WASHINGTON AND THE SCHOOL CURRICULUM
Leadership is a key concept upon which to base treatment of George Washington in the school curriculum. Although usually reluctant to assume leading roles, Washington, from a very early age until his death, was an extraordinary leader. Washington’s capacity to lead the Continental Army during the Revolutionary War, to preside at the 1787 Philadelphia Constitutional Convention, and to serve as the first President of the United States manifests his character — a word nearly synonymous in his own time with reputation (Elkins and McKitrick 1993, 37).
As a member of Virginia’s wealthy planter class, Washington was well aware of the importance of “character” early in his life. Colonial Virginian society blurred distinctions between public and private spheres of life for its wealthy members. The affairs of a person of Washington’s stature affected too many people for almost any aspect of his life to be considered private. Washington was connected to a large group of people in and around Mount Vernon that depended upon his actions and leadership. In turn, Washington depended upon his neighbors, large and small, to elect him to the House of Burgesses, which, in eighteenth century Virginia, ratified a person’s reputation (Elkins and McKitrick 1993, 38). As he grew in stature, Washington’s character continued to serve as the vital foundation for his ability to lead (Lipset 1998, 28-30).
During the American War of Independence, General Washington showed a keen sense of martial leadership. He was acutely conscious of the strategic importance of mobility and strived to keep his ill-equipped army from being pinned down in defending fixed positions against the more powerful British forces. More impressive still was his leadership in simply keeping together an army that usually lost on the battlefield, and whose soldiers were anxious for an excuse to return to their families, farms, or other occupations.
As a popular general, Washington could have used his power to impose his will over the civilian leadership, as did Napoleon Bonaparte in France and Simon Bolivar in Latin America. But Washington understood the republican basis of his power, and that enduringly successful leaders depend on the support and trust of the people they serve.
Washington’s leadership and understanding of power brought legitimacy to a new United States of America. New nation-states often suffer, according to Seymour Martin Lipset, from the problem of weak legitimacy (1998, 27). Lacking the traditional bases of authority of established nation-states, a charismatic leader is required to bring legitimate authority to a new nation-state. Washington consciously employed his character and popularity to “create respect for national authority and to bolster the legitimacy of the new nation” (Lipset 1998, 27).
Washington’s legacy to the presidency and to the Republic was his use of his charismatic leadership to legitimize the authority of the new government while resisting despotic temptations that other charismatic leaders, such as Napoleon and Bolivar, could not resist. Washington understood that a fledgling republic required a leader willing to provide it a national character and set of values (e.g., rule of law, respect for authority, and public virtue) that would serve it well during his presidency and beyond. He also understood that such a legacy would elevate his fame and place in history beyond anything he might accomplish as a king or despot. These aspects of Washington’s character and accomplishments should be at the core of the school curriculum in the United States.

National Geographic Channel presents George W. Bush: The 9/11 Interview, a world premiere documentary that reveals exclusive, first-person insight into the former president’s experience following the terrorist attacks of Sept. 11, 2001. In the most in-depth on-camera interview he has ever given on the subject, President Bush recalls what he was thinking and feeling and what drove the real-time, life-or-death decisions he faced in the first minutes, hours and days after the most lethal terrorist attacks ever on U.S. soil. Hear in unprecedented, intimate detail what he grappled with as both commander in chief, and as a man concerned for his family and fellow citizens. George W. Bush: The 9/11 Interview also takes viewers behind the scenes with extensive archival footage and exclusive materials directly from his library that open a new window into his personal experiences during that historic day that changed the face of America, and the world, forever.