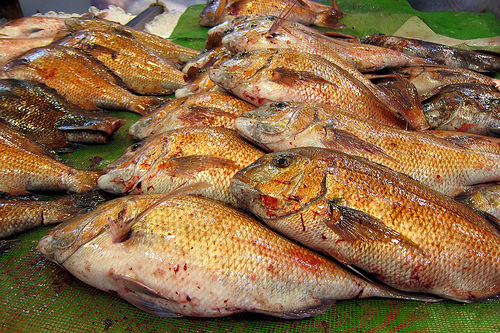 The United Nations’ Food and Agriculture Organization (UNFAO), intensive animal rearing reports that five per cent of the world’s greenhouse gases that contribute to global warming are caused by the rearing of meat to eat and transporting that meat from the supplier to the consumer accounts for thirteen percent.

In real terms that is nearly a fifth of the world’s greenhouse gases that account for global warming is down to meat production and that is more than all of the world’s private transport both on planes and on the road; vegetable production has no where near the impact on the environment.

For every kilo of chicken meat that is produced it takes between four and five kilos of grain, which means that every chicken your family eats it could have eaten over ten kilos of grain. Beef is over three times that amount of grain. Over ninety percent of the world’s soya is grown to be used as animal feed. The cruelty of meat eating is an appalling indictment against the meat industry, as between five and fifteen pounds of vegetable protein is needed per kilogram of meat. One sixth of an acre of land can feed one vegetarian for a year.

In the USA the meat industry uses a half of all the water consumed which is 5000 gallons per kilo of beef, whilst wheat uses just over 50 gallons per kilo. To put that in real terms that mean something to all of use every time we eat a hamburger we have eaten something that has taken 527 gallons to produce and that is only for a single 150 g burger.

Unfortunately the European habit of consuming meat and dairy products has had an impact on the destruction of the Amazon rain forest. Vast tracts of land and on either side of the Amazon basin is being used to grow soya for cattle feed or to graze cattle. The carbon dioxide emissions arising from the production of one kilo of beef could fuel a car for 250 kilometers or 155 miles.

However the Western world used meat rearing as a step in the process of development and there are compelling arguments as to why the third world should be allowed to do so. However there is a compelling case that meat should be more expensive. Our society reveres money and meat at a higher price would be revered and valued as a luxury product. In America the current price for meat is extremely low when looked at from both a historical perspective and also from the relative price on other countries. Cheap food impoverishes the producers the farmers, and worse still it makes unethical and inefficient methods of food production the norm. One of the challenges of the twenty first Century is to more sustainable meat produced in humane conditions using sustainable environment practises.

We do not have to become vegetarians but small cuts in the way we view meat and dairy would make a big difference if we restricted our meat eating to 500g or a pound of meat a week, a litre of milk and a 100g or three and a half ounces of cheese a week the world’s greenhouse gases would be cut by a greater level than if we left our cars at home a half of the time. What is the price of a chop in global terms.