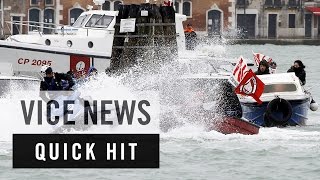 The Merchant of Venice since its recent return on October 18, 2010 to Broadway has been regarded as the best current season on Broadway leaving behind other Broadway productions. All Thumbs up to the Award Winning actor, Al Pacino whose performance in the role of Shylock took the tragic Shakespeare Novel, the Merchant of Venice to new heights. The incredible performance by Al Pacino has grabbed many celebs to the theater and recently pregnant Penelope Cruz along with her husband Javier Bardem a huge Pacino fan met the actor backstage. Robert De Niro, an old friend of Pacino and his co-star in Godfather Part II also caught the Sunday show and met the actor.
If news are to be believed the reviews for the Merchant of Venice Broadway production featuring Al Pacino are so powerful that they not only forced the organizers to think if its Broadway production that is currently scheduled for 78 performances by January 9, 2011 can be extended but they also created a hope if they can take the Merchant of Venice starring Al Pacino production to London theaters. Though nothing has been confirmed yet but British producers Duncan C. Weldon and Paul Elliott are officially in talks with the London Public Theater and the Merchant producing team to bring the production to the West End.
Current Merchant of Venice Broadway production also features stars Lily Rabe as Portia who returned to the Broadway production on November 6 just one day after her mothers death, Jesse L. Martin as Gratiano, Byron Jennings as Antonio, Heather Lind as Jessica, Christopher Fitzgerald as Launcelot Gobbo, Marsha Stephanie Blake as Nerissa, David Harbour as Bassanio, Peter Francis James as Salerio and Seth Numrich as Lorenzo.
Though its not clear yet if Merchant of Venice can hit the London Theater but its upcoming production is ready to arrive at the Derby Theatre and will run from February 4, 2011 through February 26, 2011 and the public sale of Merchant of Venice tickets is on now.
The Merchant of Venice is a controversial novel from Shakespeare that has all the elements of life such as love, friendship, greed, betrayal and forgiveness. The novel has been taught almost in all the institutes of the world and the 11th Street theater Eli & Edythe Broad Stage in Santa Monica will be presenting the modern interpretation of the Merchant of Venice featuring the Academy Award-winner F. Murray Abraham in the title role from April 14, 2011 through April 24, 2011.
Police and Protesters Face Off in Venice Lagoon: VICE News Quick Hit

Italian police blocked boats of protesters from reaching Venice’s St. Mark’s Square on Tuesday, ahead of a meeting between Prime Minister Matteo Renzi and French President Francois Hollande. More than 500 people demonstrated against the leaders’ plans to restart work on a high-speed train line connecting Lyon and Turin. They’re also demanding that cruise ships no longer be allowed into the city’s historic lagoon.