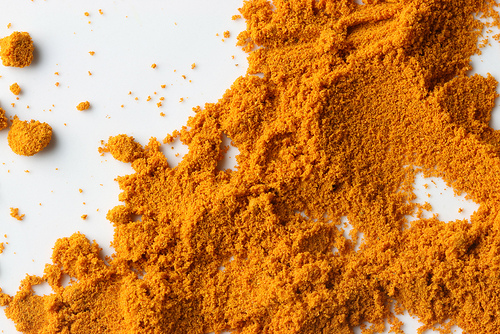 Today I write an online ode to one of my all time favorite spices: Turmeric.

Originally from Asia, Turmeric is that bright orange spice that turns your Indian curry it’s famously clothing staining color. It’s active ingredient is called curcumin and there has been tons of research out and about in the last few years about curcumin’s incredible benefits for so many bodily systems. To the old school practitioners of Ayurvedic medicine, this comes as no surprise (lots of the research has come out of India, actually) as they’ve been using Turmeric for thousands of years as a practical heal-all.

For example:
Knicked your finger in the kitchen? Dab some turmeric one it for a quick anti-bacterial blast.
Coming down with a cold or flu? Whip up a mug of turmeric tea with milk and honey to nip viruses in the bud.
Feel gassy and bloated after a meal? Drink some turmeric and hot water for a quick remedy.
Its been said to be great for eczema, ulcers and inflammations and even clearing up pimples!
Ayurvedic practitioners say its also great for asthma, burns, and pinkeye too.

Curcumin purportedly has the ability to break apart the protective biofilms that surround yeast cells (like Candida) in the intestines which gives a greater chance to kick fungal infections out for the long term. But perhaps most incredible is the anti-cancer properties that turmeric possesses. Curcumin has also been found to suppress the formation of tumors and protect against DNA damage that causes cancer. A 2000 study (by Inano et al.) found that the risk of tumor development in rats after exposure to X-ray dropped from 70.3% to 18.5% after receiving 1% curcumin (turmeric extract) in their diet. And research done on taxol-resistant breast cancer cells also showed that curcumin was also able to suppress proteins responsible for metastasis and enhance cancer cell apoptosis, which means great potential for treating cancer. For these purposes, turmeric is also available in capsule form because many find it hard to drink glasses of turmeric tea a day.

I say, in whatever form, curcumin is a must have in everyone’s kitchen as first aid!