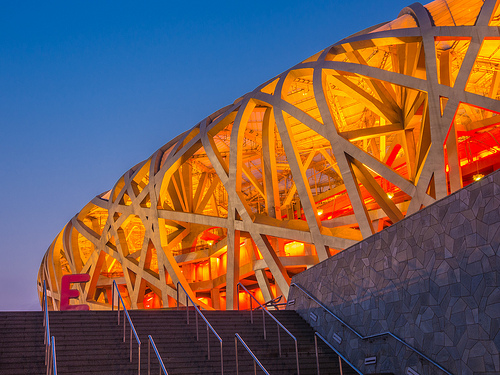 Pir-e-Sabz Fire Temple is considered to be one of the most sacred pilgrimage sites of Zoroastrians. It is located in the village of Chak Chak, near a tall mountain in the heart of a desert in central Iran. The place is not very far from Ardakan in Yazd province. Many Zoroastrians come to this temple from India and also from within Iran.

It is believed that the pilgrims traveling to this sacred shrine have to stop in their path when they are in view of the temple. They have to then proceed to the temple on foot from there. Most of the people, who travel to Iran to visit this place, arrive during June 14-18 every year.

There is a two-planked doorway leading to the Fire Temple with an image of two Achaemenian soldiers embossed on it. The doorway takes you through to a rock shelter which is paved with concrete Malachite. The ceiling holds a beautiful chandelier. An altar can be seen here with three oil-burning lights. There is also a container next to it used for refilling the oil in the lights.

You will notice a set of trays directly in front of the altar arranged to look like a lotus. Pilgrims can place their donations in these trays. These donations can also be in the form of oranges and cucumbers to serve as offerings.

The Ancient Tree and Waterfall

During your travel to Iran, you will notice that there are many holes in the rock shelter, through which some tree branches have entered the temple. There is also a small waterfall flowing inside Pir-e-Sabz Fire Temple which keeps the altar wet. In fact, the name Chak Chak refers to this drop-by-drop fall of water in the rock shelter which symbolizes Anahita, the angel granting pregnancy, prosperity and water. Zoroastrians greatly revere this angel and disallow anyone from treading on the sacred altar.

There is a story behind the building of Pir-e-Sabz Fire Temple. It is believed that Nikbanou, the second daughter of Yazdegard III of Sassanian dynasty, was chased by some Arab invaders. She prayed to Ahura Mazda to safeguard her dignity. In response, the mountain opened up and she went inside and has never been seen after that.