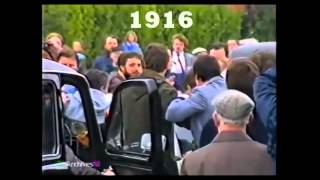 After William and Kate made first official public appearance at a Trearddur Bay’s life boat station in Anglesy, North Wales, the couple traveled to Belfast during their debut visit to Northern Ireland on Tuesday (March 8, 2011) amid the tightest security.

Outside the City Hall in Belfast, William and his fiancée flipped pancakes and had warm talks at a children’s cancer charity Shrove fund-raising event held by the charity Northern Ireland Cancer Fund for Children. About hundreds people gathered under bright shine to greet the pair.

Like some recent occasions, Kate looked simple but stunning in a belted, mink-colored, double-breasted coat cut above the knee paired with a frill at the base, black opaque tights and black high-heeled shoes while Prince William wore a navy suite.

Because of security risks, no information about the visit was released and the area around Belfast City Hall was supervised by the police as well as police marksmen who kept watching from surrounding rooftops.

Besides meeting the public, William and Kate also talked to Northern Ireland First Minister Peter Robinson and visited Hillsborough Castle in Co Down for lunch with Northern Ireland Secretary of State Owen Paterson.

Perhaps, William feels… thrilled when he sees his future wife showing off her cooking ability

Kate is cheered up by many people

The couple’s visit to Northern Ireland was warmly welcomed. Workers in some offices surrounding City Hall tried to get a glimpse of William and Kate from windows while children performed a song and dance performance. Gloria Lowry, a well-wisher, said that she was felt very happy to shake their hands and talk to them separately. She also wished them the best for their wedding day.

She receives a bunch of flowers from local residents

Kate warmly glances at her fiancé. This trip is the latest public appearance by the couple since their engagement