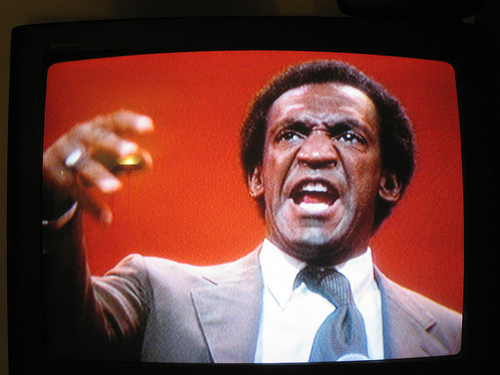 The idea behind writing for comedy is easy enough to understand – make people laugh – but the elements that result in something that is truly funny are complex and varied. Comedy is essentially drama without the laughs, and, just as in drama writing, there are formulas to writing a successful comedy. Humor can be used in almost all aspects of writing: in conflict, in character development, in story structure, and so on.

Conflict serves as a starting point for your story structure. It is what makes the story lead somewhere; it’s what gives your comedy a point. Conflict not only makes for easy, expandable laughing points; it can serve as motivating factors for the characters as the story develops and takes shape. Much like the three types of conflict in classic dramatic writing (man against nature, man against man, and man against himself), there are three basic types of comic conflict: global conflict, local conflict, and inner conflict.

Global conflict has to do with a character being at war with the world around him or her. In comedy writing, this can go one of two ways. First, a normal character may be placed into a comic world. For instance, in the television sitcom Arrested Development, the main character Michael stands as the voice of reason in a world that is relentlessly and hilariously against him. Alternately, a comic character can placed into the normal world. For example, the 2003 Will Ferrell film Elf placed a human who has been raised as an elf at the North Pole into real world New York City.

Inner conflict places man versus himself. This is considered by some to be the deepest type of conflict, and that’s no less true of comedy writing. In many cases, a normal character becomes a comic character in this type of conflict. A good example of this is The Mask starring Jim Carrey, where Carrey’s character is a normal person in possession of an artifact that turns him into what is essentially a cartoon character – the two sides of his personality are in conflict over which he should be.

All that conflict leads us to where the conflict comes from – comic perspective. The most important part of a comic character is his perspective – what makes him think the things he thinks and do the things he does. It is his unique way of looking at the world. The more exaggerated the comic perspective, the funnier the character is going to be. For instance, a guy who sometimes gets paranoid is not inherently funny. A guy who is so paranoid that he spray paints his car silver (because ‘they’ can’t see silver) and makes a suit of tin foil is a good expansion of that paranoid person’s comic perspective and an effective use of exaggeration.

Exaggeration takes your character’s perspective to the end of the line, which is what will make that character funny. As such, comic perspective and exaggeration go hand in hand.

A good way to build on your character’s personality is to make the character flawed. People are more drawn to characters that have recognizable flaws – nobody is perfect, and if your character is imperfect in a hilarious way, you’ve got relatable humor.

Further development can be made in revealing your character’s humanity. The Comic Toolbox describes humanity as “the sum of a character’s positive human qualities that inspire either sympathy, empathy, or both.” Humanity unites your character with the audience, allowing sympathy and empathy to work at making the viewer care about your character. It’s important in all aspects of writing, but, in comedy, if a joke relies on the audience having any emotional bond with the characters and the humanity is not there, the joke will fall flat and people probably won’t be interested.

Concepts to Build On

Humor and comedy go back as far as writing itself; and, as in any art, most of the groundwork has been laid. It is important to know where the ideas have been developed and which concepts are the most solid ground for expansion, so that you have some direction with your writing and so you don’t wind up reinventing the wheel. Building on the concepts that have already been established as tried and true is the best way to ensure that you will get the most laughs.

Clash of context is one such example of a tried and true comedic concept. In general, the unexpected is what takes us by surprise and makes us laugh – clash of context takes advantage of this effect by taking something from where it belongs and places it where it does not.

There are a few ways to incorporate clash of context into comedy writing. Physical juxtaposition puts the items that clash physically close to one another. Emotional juxtaposition would place something emotional in an impassive setting or vice-versa – for instance, a hot dog vendor selling in the aisles at a funeral. Attitudinal juxtaposition has to do with the aforementioned conflict development strategy comic characters in opposition. The clash of context between the character’s personalities is what makes this strategy humorous.

Exaggeration is another important tool of the comedy writing trade. This one has a lot of range – it can, and should be, incorporated into many of the concepts and strategies discussed here (exaggeration of comic perspective, discussed previously, is one such example). Everything your characters do should have some level of exaggeration -mannerisms, understanding of the world (or lack thereof), responses, and so on – exaggeration keeps the character interesting and makes everything a little bit more outrageous.

In writing jokes, build tension and release. Go over jokes and ensure the payoff is positioned optimally in the joke. “Sometimes when a joke doesn’t work, fixing it is just a matter of rearranging the parts. When in doubt, put the funny word last.” If you give away the punch line of a joke before you’ve built it up, the joke is going to fall flat because there is no element of surprise. The longer you can build to tension without the audience losing interest, the bigger the payoff is going to be.

The rule of threes is very simple: setup, setup, and payoff. This method is best used in lists. Start with two seemingly normal things that go together and add something completely outrageous as the third. As an example, “I’ve got to run some errands … the bank, the grocery store, and the crack house.” The first two are obviously normal errands, while the third is shocking and takes the reader or viewer by surprise.

As with any kind of writing, the best way to get great results from comedy writing is to begin with a rough draft. Come up with a rough draft of a joke, then go back and ask yourself what the essence, the basic idea behind the joke is. Rewrite with that idea in mind to make the most out of the joke’s potential.

The doorbell effect is when the character has a strong certainty of the outcome of a situation, then his – and the viewer’s – expectations are shattered. A good example of this is in the opening scene of the film Super Troopers, where three stoned teens have a freak out because a police car with its siren on pulls up behind them. The teens experience vast relief when the police car abruptly passes them, but, as they discuss their close call, one notices in the rear view mirror that the same cop has somehow gotten behind them and is approaching the vehicle. The teens expected that the cop had driven away, when their expectations were shattered by the lights in the rear-view.

One concept popular to sitcoms is the running gag – use a joke several times, but tweaked in new directions each time. Tweaking the joke ensures that it is going to stay fresh, and there are ideal ways to go about it. Change some details each time – the circumstances surrounding the joke, the lead-up to the joke, and so on. Escalate the importance of the joke each time it’s told, so that by the end it’s a proper laugh-riot. Lastly, change the source of the joke – have a different character make the joke.

The center and eccentrics approach to comic stories regards an everyman surrounded by comic characters. The audience relates to the everyman and experiences a bizarre comic world through his eyes.

Character comedy has to do with direct emotional war between strong comic opposites. This incorporates the character conflict “man verses man” into plot development.

Some comedy writing has its emphasis on supernatural powers as a driving comedic factor. The powers are used as a plot device to put the character into unique situations – like in the television sitcom Bewitched. It is important to keep in mind, when writing for powers, not to be hackneyed about it. The same old thing just won’t do because nobody will care, so if a writer chooses to pursue this method it absolutely must be original.

Ensemble Comedy is when there isn’t one main character, but rather the emphasis is on a group and how they interact. This is good for multiple intersecting storylines and is most apparent in sitcoms such as Friends or Seinfeld. While there are main characters to each of these sitcoms, the larger emphasis is placed on interpersonal character interaction.

One of the easiest – and least respected – comic story structures is an emphasis on slapstick. Slapstick is generally thought of as shallow and simple, though there is value in incorporating some slapstick in situations where there is something lacking.

The last type of comic story to be discussed is satire and parody. These can be the most challenging types of stories to make original and hilarious, but the payoff is great if you can pull it off. These are not only funny and relatable, but are oftentimes socially relevant. A good example of this is the wildly popular cartoon South Park, which often satirizes politics and parodies cultural phenomena.

Writing for comedy sounds like a lot of fun, and one might think that because it seems like a lot of fun that it is easy. This is not the case. Like any art, writing for comedy requires practice, patience, and knowledge of the underlying structures that make for quality work. The writer must consider not only what he finds funny, but what the audience will and in what context.